10 Most Beautiful Places To Visit In Croatia

These are some of the most beautiful places to visit in Croatia that are not to be missed out on in any case!

If you are planning on visiting Croatia soon, don’t miss this post, because I will tell you the best places to see in Croatia to enjoy your trip to one of the most beautiful European countries.

Top Places to Visit in Croatia

Located in the Southern part of the Adriatic Sea, Dubrovnik is the most renowned tourist spot to be situated in the Mediterranean sea.

The Peljesac bridge serves as a connectivity path between the Dubrovnik exclave and the country.

Owing to the city’s picturesque architecture and beautiful sights, it has been granted a place on the UNESCO World Heritage Site list.

The city is adorned with beautiful churches, restaurants and five-star hotels.

There are numerous sights to explore and the sunny beaches are packed with scuba diving and kayaking adventures.

One can take a walk in the botanical garden on Lokrum islet to connect with nature or be enchanted by the glorious city walls.

To find out more about the cultural and historic values of the city, visiting the Cultural History Museum will also be a riveting idea.

Another one of the prettiest places in Croatia to visit is the coast of Dalmatia.

Similar to Dubrovnik, it is also located on the Adriatic sea. The Dalmatian coast is a must stop on the itinerary of any visitor who finds themselves in Croatia.

Some of the most beautiful beaches of Croatia can be found in this region which only further enhances its allure for the tourists.

There are a tremendous number of options for entertainment, food, sightseeing, and more.

From serene beaches to the exquisite medieval architecture and streets made of marble— all are a testament to the region’s supremacy.

Those whose wanderlust may still not be satiated by touring the historic sights and beaches can take their trip up a notch by booking a gulet cruise in Croatia.

A gulet cruise on the Adriatic sea will provide an enthralling adventure that includes sunsets, fishing, interaction with other tourists, food and an overall amazing time.

The cherry on top is one of the most convenient and worthwhile ways of journeying through the most beautiful islands of Croatia.

Regarded as the oldest and largest national park of Croatia, the Plitvice Lakes National Park has managed to earn itself a spot on the UNESCO World Heritage list.

The park is considered extraordinary and distinguishable from other national parks owing to the pretty lakes, caves and waterfalls that it houses.

The park is immensely popular amongst the locals but the tourists visiting Croatia make sure to not miss out on this amazing place either.

Hence, the place records a total of 1 million visitors annually.

There are a total of 26 lakes inside the park which also serve as a reservoir for drinking water.

These lakes are filled with crystal clear water that calls out to people to jump right in them for a swim.

Unfortunately, swimming is not allowed but even just looking at the clean shimmering water will fill anyone with peace and happiness.

Undoubtedly, it is among the most beautiful places in Croatia that deserves a visit.

4. Mljet Island, one of the most beautiful places to visit in Croatia

The Mljet island (also a part of the Adriatic islands) is well known for its eye-catching greenery, wines, cheese and delicious olives.

The island lures visitors from various parts of the world and never ceases to amaze them with its enchanting beauty.

A national park was also established at its Western end in 1960. Other than this, the island’s geographical structure mostly consists of slopes, ridges and crests.

The two salted lakes located on the island, namely ‘veliko’ and ‘Malo’ are widely popular. These lakes are a major source of attraction for visitors for swimming and fishing.  The lakes add a beautiful charm to this island.

After all, there is a reason that island is labelled as the “most seductive” island of the Adriatic. It even has had Prince Charles visit it not one but two times.

Zlatni Rat, also known as the golden cape or golden horn is located at a distance of about 1 mile from the town of Bol.

The region can be best described as a beach made out of white pebbles.

It has such type of a distinctive shape that many travel companies use it in their brochures to advertise tourism for Croatia.

It’s become so famous to the point that it can now be identified as an unofficial symbol for Croatian tourism.  It is also regarded as one of the most outstanding beaches in all of Europe.

Even though the main reason for the beach’s popularity is its shape that makes it stand out, it is not its sole spectacular aspect.

The beach has the unique ability to change its colour from turquoise to dark blue at a distance of 10 to 20 meters.

6. Split, one of the best places to visit in Croatia

It is the second-largest city in Croatia and the largest one in the region of Dalmatia.

Spit is home to the most beautiful of beaches in the Croatian region but its breathtaking architecture and mouth-watering delicacies can’t also be ignored.

The city also has a vibrant nightlife and will appeal to a lot of youngsters out there who are fond of partying and mingling with other people.

As a result, the city can also be best described as an integration of contemporary and ancient. It’s one of the best cities to visit in Croatia!

The people who are old at heart and much interested in the cultural and historical aspects of things will be entertained by the monuments, museums and so on.

While the younger generation will be attracted and amused by the city’s wild partying scenes.

Dugi Otok island is easily one of the most beautiful islands to be situated in the Adriatic sea, and one of the top Croatia destinations.

It is the seventh-largest island of this region and is the best place for those who want to escape to a more peaceful and calm environment to unwind.

This does not mean that the place is short on activities to entertain the adventurous lot.

One can take a joyful ride on their ferry to further explore the waters or simply relax in the sand to gain tranquillity. Either way, the place is a must-visit for anyone who finds themselves lost in Croatia.

If you’re looking for places to visit in Croatia off the beaten path, you’ll love Dugi Otok!

Back in the old days, it was regarded as a fishing town but now the place is visited by masses in the summer and has gained popularity as a vacationing spot.

This enchanting town will capture the heart of its visitors through its pretty little streets, magnificent churches, town museums and more.

There is also the Rovinj aquarium that is known to be the oldest in all of the European regions.

To conclude, the town of Rovinj is filled with history, values and lots of options for sightseeing which makes it one of the most beautiful places to visit in Croatia.

It is a famous Croatian park located near the river of ‘Krka’ which also inspired the park’s name.

If you are asking yourself where to go in Croatia, Krka National Park is a must!

Although the park was initially established for the preservation of the river, it has now garnered fame as an educational, cultural, recreational and scientific hub.

The park provides several options for entertainment including sightseeing, souvenir shops, boat trips, museums and even a restaurant.

Other than this, what also increases the park’s demand among the visitors are the archaeological remains preserved at the sight which date back to Roman times.

To conclude, Krka national park is a must-visit for anyone visiting Croatia.

The island is home to some of the prettiest beaches in the region and is well known for its rich culture and ideal climate.

For these very reasons, Hvar has become a renowned vacationing spot and attracts visitors like bees during the summers.

The island provides some of the most beautiful sceneries that will surely make a mark in the memory of all its visitors.

The fortification walls, baroque palaces and the main square are some of the main attractions of the island.

In addition, the city’s nightlife also has much to offer to those who have a knack for partying and staying out late.

Map with the best places to see in Croatia

On this map of Croatia I’ve included all the best places in Croatia you cannot miss during your trip:

So what are you waiting for? Plan your trip to Croatia right now!

SPREAD THE WORD!
PIN THIS TO YOUR TRAVEL PINTEREST BOARDS ↓ 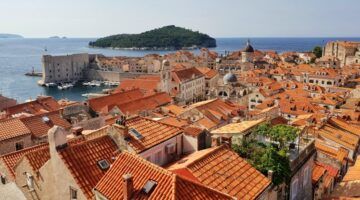 Top 7 Free Things to Do in Croatia 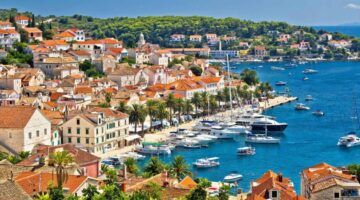 10 Best Islands in Croatia to visit I Croatian Islands Hopping